Social media has long blurred the lines between reality and fantasy. Users regularly display a fantastically idealistic lifestyle to friends, family and followers. However, this line between fantasy and reality has been further blurred thanks to the rising popularity of CGI or virtual influencers. Digitally rendered influencers have been present online for a few years now and we have seen them become more integrated into marketing plans.

Thanks to technological advancements in AI, motion capture and VR, these virtual influencers have become increasingly interactive and humanlike. The realistic developments have enabled virtual influencers to go beyond social media and make live appearances or feature in advertisements alongside human celebrities. While their genetics might be fake, their jobs certainly aren’t.

CGI influencers have their own online presences, just as traditional human influencers would. They have their own political views, opinions on social issues and even relationships with other CGI personalities. These personalities and identities are shaped by specific CGI-influencer studios and brands who have designed influencers to personify their voice, values and messaging.

It’s a well-known fact that consumers are more likely to engage with influencers over brands on social media, so it’s understandable that brands would want to use influencers they can fully control. CGI influencers can be put in any outfit, location or event at any time—they aren’t bound to the reality of humanity. This availability makes CGI influencers more appealing for brand partnerships.

How are brands using CGI influencers?

Brands have been seen to use CGI influencers in different ways. While some have temporarily jumped on the CGI bandwagon (see CGI Colonel Sanders for KFC), others have begun incorporating virtual influencers into main marketing activities to launch products, campaigns or promote key messages.

While Noonoouri is fake, the interactions she has with her audience are not. CGI influencers incite the same genuine interactions and engagement as human influencers. Noonoouri’s popularity and audience engagement online has grown significantly as a result of partnerships with couture and designer brands. The virtual influencer recently starred alongside Chinese actor Li Xian in a new campaign for luxury menswear brand Ermenegildo Zegna. 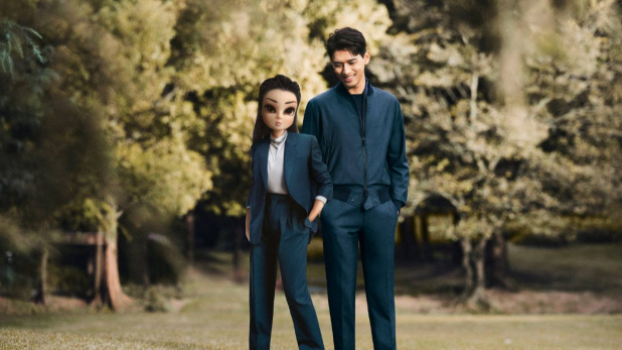 Another brand utilising CGI influencers is LG. LG used Reah Keem to announce the new line of LG CLOi UV-C robots. The robots were designed to be used in highly populated areas to shine a UV-C light that reduces exposure to harmful germs. Reah Keem was utilised to discuss why the robot was so important in her life and that she was excited to start travelling the world again—a world she technically doesn’t exist in.

Keem’s Instagram presence launched in May 2020 and we have since discovered she is a music artist living in Seoul. LG are yet to reveal if they plan to work with Keem as a continuous partnership, but Keem seems happy to “chill in [her] studio” and develop her music in the meantime.

CGI influencers are predominantly popular with the younger generations on social media (think Gen Z and Zillennials), which is why the World Health Organisation partnered with CGI influencer Knox Frost to inform them of important COVID-19 best practices. 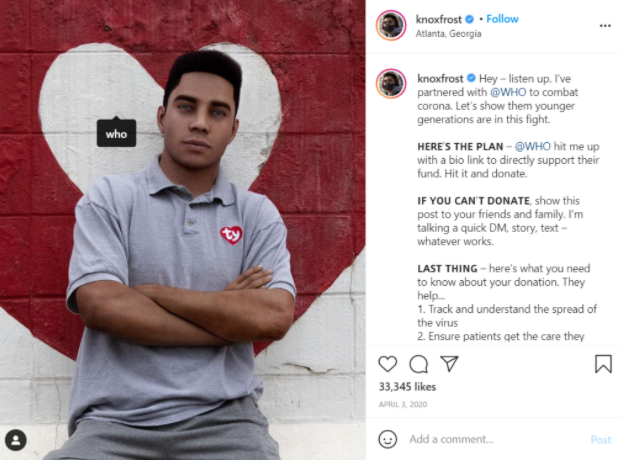 The Instagram was part of WHO’s COVID Solidarity Response Fund and the partnership was pro bono. Frost provided a link to a donation page that helped fund medical equipment for key workers, provide those ill with the care they needed and tracked the spread of the virus. While Frost isn’t real and can’t actually catch COVID, the impact he has is very real and shareable. CGI influencers are surrounded in an aura of mystery and intrigue which typically incites a large amount of comments and shares—ideal if you want a key message to be shared organically.

Automotive brand Renault has created its very own virtual influencer, Liv, who is used as a brand ambassador. Liv was used to debut the brand’s KADJAR model and is the first CGI influencer to be used within the automotive industry.

Renault used Liv to emphasize the incredible experience of driving its new car. The ad shows Liv feeling real behind the wheel, showing the authenticity of the actual driving experience. Since Renault owns and designed Liv, she is able to perfectly embody the ethos and messaging Renault wants to portray.

Why you should consider using CGI influencers

Behind each CGI influencer is a team of clever creators that are responsible for moulding the virtual figures into internationally recognised influencers. These creators decide how the influencers look, sound, dress and act. They are malleable influencers and can be shaped to fit exactly what a brand needs, or act as a personified version of a brand.

These creators can edit the influencers onto any backdrop they (or a partnering brand) want. Virtual influencers give brands more control over collaborations and partnerships. The process of using CGI influencers is significantly quicker than using human influencers. If there is a mistake in or quality issue with a real life influencer’s content, it can take a while to have the content reshot and edited. With a virtual influencer, a mistake can be corrected within a couple of hours or even minutes.

Virtual influencers are eye-catching and exciting. While brands have begun using them more frequently, partnerships between CGI and brands are still rare. This means they gain more attention than traditional partnerships. This attention comes from both consumers and media, with partnerships being written about more often than not, resulting in more exposure for your campaign.

If you want to receive our industry insights, visit our influencer marketing blog here.