We correlate data on which brands had the most active hashtags, mentions and organic engagements, so our results are always authentic and accurate. As social media advertising spend is on the rise, influencer marketing platforms have transitioned into pretty muddy waters. In 2019, Canada and the US wasted as much as $255 million of the $1.4 billion spent on Instagram influencer marketing on accounts with fake followers.

In the UK alone, ad watchdogs have also cautioned around 300 social media influencers for breaking the rules when it comes to paid advertising for posts on Instagram. This hasn’t slowed down the demand for influencer marketing services, however, in 2021 influencer marketing is set to grow 15%, to a $5.8 billion dollar industry.

Without further ado, here are the top 10 most active brands in influencer marketing for March 2021.

March saw L’Oreal launch new products, ambassadors and a celebration for it’s most iconic campaign: Know Your Worth. L’Oreal activated numerous beauty influencers in India to announce and promote the new Hyaluronic Acid Serum. The launch was supported with the hashtag #MagicOfHASerum and the influencers all posted videos discussing the benefits of the serum whilst giving a demonstration. Some influencers undertook a “Two Week Challenge” to show the difference the serum can make.

In addition to this, L’Oreal announced new global brand ambassadors to celebrate the 50th anniversary of the Know Your Worth campaign. L’Oreal used celebrities within different passion-points (music, cooking and sports) as ambassadors, and all content was supported with the hashtags #KnowYourWorth and #50YearsOfWorth. Key messaging revolved around empowering women. Ambassadors included Rochelle Humes, Ellyse Perry and Poh Ling Yeow.

Fashion brand Pretty Little Thing, better known as PLT, is frequently seen using influencers on Instagram to promote itself; and this Marchis no exception. PLT uses influencer marketing to promote its brand in general, rather than specific campaigns or products. It regularly collaborates with hero influencers for new fashion collections, but also uses micro and macro influencers for continuous Instagram promotion. Almost all posts feature the hashtag #prettylittlething.

In March, we did not see any specific hashtags or messaging from the influencers PLT has sponsored. The content is usually focusing on a piece of an outfit, or the whole look. The content was a fairly even split of gifted items and paid partnerships, and featured influencers mainly from the UK or US. PLT predominantly used micro and macro influencers, but did collaborate with its newest UK ambassador, Demi Rose.  Other influencers include @summerharte_, @glowybychloe and @shannonlouise05.

Dior doesn’t frequently utilise influencer marketing as a main strategy, but does around key moments in the year. This month, Dior sponsored influencers in Korea to promote its AW21 Fashion Show that was live streamed on Dior’s website. The influencers were gifted items as if they were in regular attendance. Influencers used to promote the show include @jessica.syj and @sooyaaa_. 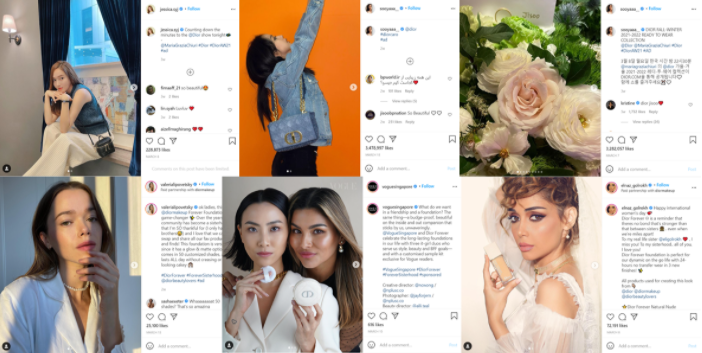 Other activity was surrounding Dior Makeup’s Forever Foundation. The brand used hero influencers to promote its product, and messaging surrounded empowering women and a mention of International Women’s Day. The posts showcased the foundation in use and used the hashtags #ForeverSisterhood and #DiorForever. Influencers used include @elinaz_golrokh and @valerialipovetsky.

In March we saw Bang Energy continue its constant influencer marketing activity promoting its drink. Bang uses South American influencers to continuously promote products and encourage social media uses to follow the CEO of the brand. All content created is video content and generally promotes the drink as an add-in clip or in the background.

The type of content produced wasn’t primarily focused around the energy drink, but showed an “idealistic” and “aspirational” lifestyle, with lavish houses and expensive cars and the energy drink thrown in there randomly—almost suggesting Bang customers could achieve this life from simply purchasing the drink. All the content was sponsored, rather than gifted and there was almost no discussion of the product, with all posts seemingly to be content for the sake of content. Bang seemily uses the same influencers frequently and has made long-term partnerships with them. These influencers include @thocostaoficial, @pameladrudi and @henriquelima.

Amazon Prime Student recently used micro influencers, some of whom are Amazon Campus Managers, to host giveaways where their followers could win an Instax camera. The influencers used all have their own Prime affiliate codes that linked to a landing page where leads could sign up to their discounted Prime subscription. In addition to this, Prime Student also ran a giveaway where the winners could win a Prime Video “Swag Bag”. 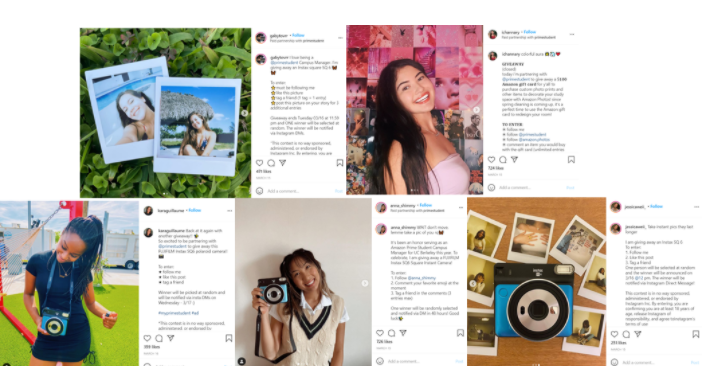 By using real students as influencers, Amazon Prime is able to guarantee that its sponsorships are seen by its target audience. Furthermore, using a giveaway that encourages re-shares means the content spreads to other new students. Influencers used include @gabytovrr, @anna_shimmy and @ichannary.

Like To Know It continued its influencer activity through March. It has focused on US fashion and family influencers, particularly those with young babies to promote baby clothing. Content pushed frequently featured offers at Walmart or Nordstrom. Influencers used this month generally were macro or hero and included @tannermmann, @rachparcel and @peyton.baxter.

Most content surrounded fashion and needing a new Spring wardrobe. All captions redirected viewers and followers to download the popular app from the influencers’ biographies. Supporting hashtags included #LikeTKIt and #LTK.

Ideal of Sweden is a Swedish fashion and lifestyle brand for mobile accessories. Ideal of Sweden seems to have a continuous influencer marketing approach, and regularly uses micro influencers to promote bags, earphone cases and phone cases. The influencers are presented with a discount code their followers can use on the brand’s website. Influencers are generally from the Netherlands, Belgium, Germany or Sweden.

All content were static images, but around half used Instagram carousels. The content was product-focused, with the caption mentioning the specific product name and an endorsement. All posts feature #IdealOfSweden as a hashtag, and some use #IdealOfSwedenAmbassador. Influencers used include @sylvana.elling, @doortjedeboer and @lisamarie.bchr.

The Adventure Challenge is an adventure scratch book company that provides customers with keepsake adventures. The brand doesn’t use influencer marketing as a continuous strategy, but for launches and key calendar moments. This month, the brand announced the launch of a new Solo book and used influencers to promote it. The content was static-imagery, usually portraying one of the adventures in the book. Captions encouraged viewers to purchase the book using links in the influencers’ bios and a discount code.

McDonalds has been known in the past to use influencers to promote new and seasonal products, and March has shown us just that. The fast food chain activated influencers in the US to promote the launch of new chicken burgers. McDonalds used popular food influencers to announce a giveaway, where the winner could win one of the new sandwiches every Sunday for the rest of the year. 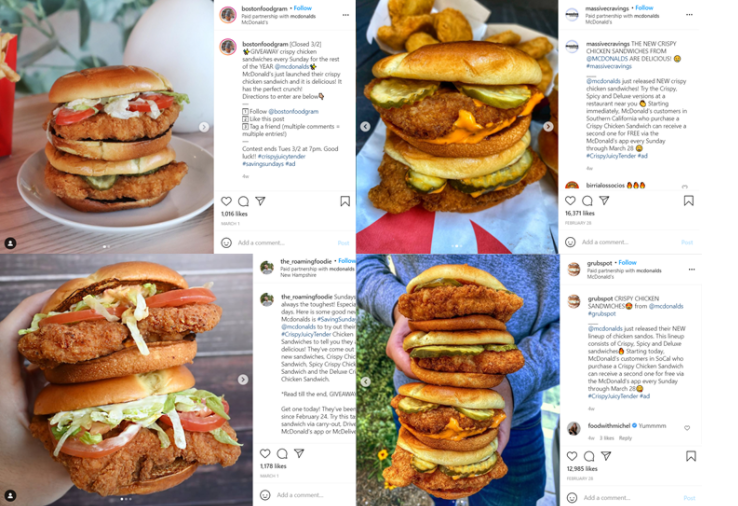 Men’s grooming brand Manscaped sponsored a series of posts on popular football channel AFTV. The brand and football channel collaborated for a series of FanCams, discussing football games that had recently happened. The content featured Manscaped’s logo overlaid on the video, as well as a specific discount code for AFTV. 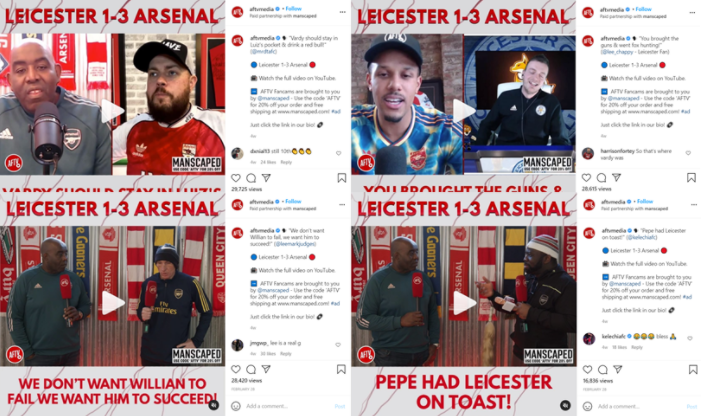 The collaboration provided a specific discount code for AFTV viewers, which would allow Manscaped to directly track conversions from the posts. The code provided a 20% discount and free shipping, which was revealed in the captions. The captions did not feature and brand or campaign specific hashtags.

Our influencer and social marketing services are located worldwide, with our agency network based in the USA, UK, UAE and China.

If you want to receive our industry insights, visit our influencer marketing blog here.