Discord is a free voice, video and text chat app that’s used by millions of people all over the world to virtually hang out with their friends and communities. Discord users can download the app on their mobile devices or PCs to keep conversations going on the move.

Discord was designed specifically for the gaming community. For the gaming community, Discord allows users to keep in touch with their teams and strategize mid-game thanks to the voice calling and chat capabilities. The platform benefited hugely from the surge in online, team-based video games (think your Fortnite Battle Royales and Overwatches), and now plays host to thousands of online communities—both gaming and not.

So, what are the best public mobile and PC gaming Discord server names you should be aware of?

Minecraft is one of the most popular games within the gaming community and has won many awards hailing it as one of the greatest video games of all time.

Minecraft’s official server is one of the most popular gaming Discord servers on the platform. Members can discuss the latest Minecraft news and updates, share their own creations and connect with other Minecraft fans. It has a wide range of channels including Survival Discussion, Bedrock Mechanics, Java Mechanics and more.

Riot Games-owned VALORANT has one of the most active gaming Discord servers on the platform. With just under 800,000 members, it can be tricky to access this server at peak times. But, with a little patience, you can access a global hub of all-things VALORANT.

Fortnite was released in 2017 and quickly became one of the most popular games in the world. The Official Fortnite server has just under 782,000 members and is split into the following channel categories: Discord Information, Fortnite News, General Community, Battle Royale, Creative, Save the World, How Do I, Imposters, Bug Reporting, Homebase Broadcast and Weatherman Broadcasts.

All active channels have their own sub-categories that users frequently chat in. 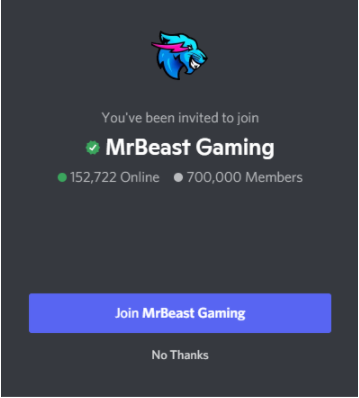 The server doesn’t include a chat room because of the size of its support base.

TommyInnit uses his gaming Discord server to inform members when he is going live on Twitch or to let them know he has uploaded a new gaming YouTube video.

r/leagueoflegends is one of the biggest gaming Discord servers run by its community. Rather than an official server, the r/leagueoflegends was created for the subreddit group. League of Legends is often cited as the world’s largest eSport game with an international competitive scene made up of 12 leagues.

Nookazon is one of the unofficial Animal Crossing: New Horizons gaming Discord servers. The server was created as a marketplace to trade Animal Crossing: New Horizons items and more; you can buy and sell items for the game. These are items like art, bushes, clothing, DIY recipes, flowers, fossils, fruits, furniture, materials, NPC, photos, posters, services, songs, tools, and villagers.

Games Fanatic Central is one of the gaming Discord servers that has channels for different games. Supporting a range of console and mobile apps, fans come together and share their wins and memorable gameplays. They have channels for Marvel Contest of Champions, War Dragons, Dragon Village M, Star Wars – Galaxy of Heroes, Zelda, Pokémon, and Animal Crossing.

MultiplatformGaming is the Discord server for the website Multiplatform Gaming, which was established in 2016. The community started as a hangout joint for a common group of friends but grew into a home for gamers. The community has amazing perks, game servers, tournaments, stream teams, and giveaways.

What is the best gaming Discord server?